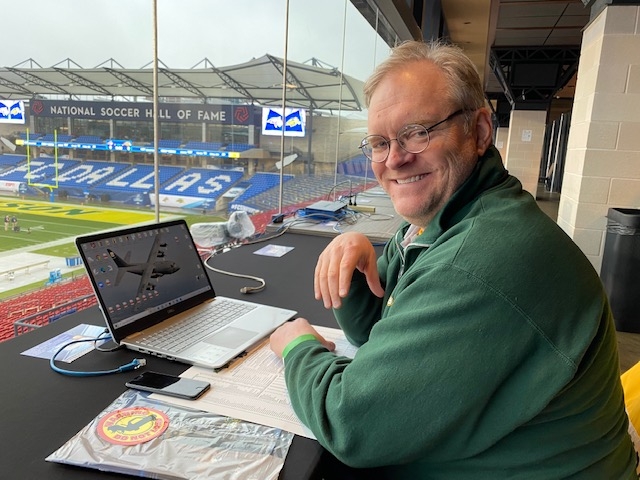 (Frisco, TX) -- Retired Air Force veteran and Fargo native Craig Schwinden is transitioning from one career to another, but in the meantime he is serving as Sports Editor for the NDSU student news outlet "The Spectrum".

The 56-year-old retired from the Air Force in September, 2016, and a short time later enrolled at NDSU to pursue a degree in Emergency Management and Disaster Services.

In mid-December, he approached "The Spectrum's" managing editor and asked if could write for the outlet.  One  month later Schwinden is in Frisco, Texas covering the Bison as they pursue another national title.

"I went in and asked if I could contribute something once in awhile.  We had a good interview, they reviewed my writing samples and then offered me the position of Sports Editor," said Schwinden.

The veteran took an overnight bus from Fargo to Frisco to cover the game. His other pursuits include serving as the backup clock and scoreboard operator for Bison football games. He also works as high school football referee, and worked the Dakota Bowl.

"It's been really amazing.  I've been a Bison football fan forever.  It's awesome to be here.  It's also head scratching because I'm not a journalism major.  It's just amazing how life has worked out," said Schwinden.