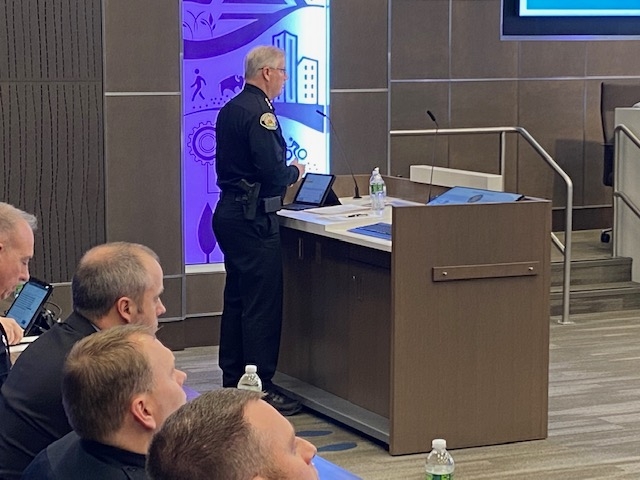 (Fargo, ND) -- A pointed exchange took place Tuesday at the Fargo City Commission Chambers as Police Chief Dave Zibolski was questioned about morale and staffing in his department.

"To me our number one job as law enforcement, law and order and public safety.  Then to have these numbers, and they are all now coming out which is great, why were we not aware of this? Because this just didn't happen today.  So this is very concerning. I'm glad it's coming out to the public right now, but it should have been done a long time ago," said Commissioner Dave Piepkorn.

The meeting provided an opportunity for Chief Zibolski to give an update on the department in the wake of recent local media reports focused on exit interviews with officers who have recently left the department.  Some officers cited what they described as a poor work environment while also criticizing the chief's leadership.  Currently the department is down about 20 sworn officers which makes up around 10 percent of the overall force. Zibolski contends on a percentage basis the staffing shortage is comparable to other police agencies and departments in the region and around the country.

"It's been a very difficult two years for our law enforcement officers and department staff. From protests to Covid to large department changes. It's extremely important and I think we would agree that we are taking care of all of them so that they can provide excellent service to our community.  Myself and my executive staff are strongly committed to doing that," said Zibolski.

Following Zibolski's presentation, Commissioner Tony Gehrig said he wants the chief and the commission to work together to identify any problems that need to be addressed within the department and to come up with a mutually agreed upon plan and timeline for the Chief to solve the issues. If the problems don't get solved  Gehrig indicated the city could look to replace Zibolski.  Chief Zibolski later said if such a plan was put in place that he is confident that he his leadership team could effectively address the issues.