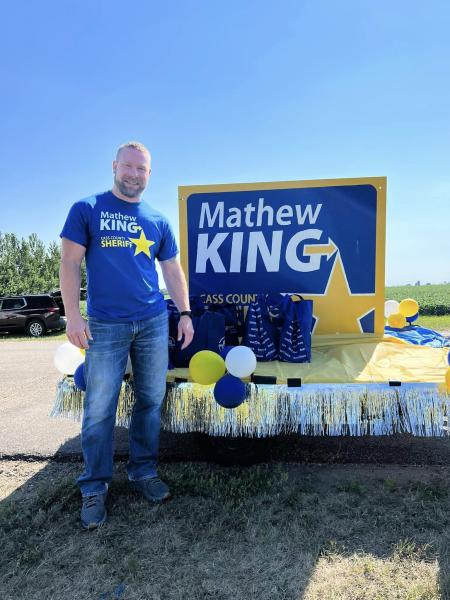 Image by Mathew King for Sheriff

(Fargo, ND) -- Cass County Sheriff's candidate Mathew King says he has nothing to do with an entity known only as "Code 4 Media". Through an open records request, the entity asked the sheriff's department to release details of an internal investigation having to do with a lieutenant who shared a nude photo of himself with a colleague. Sheriff Jahner released the records to local media earlier this week.

"I don't believe that Tommy Ray needs to go through that embarrassment again. I don't believe all of that stuff, so I don't think whoever Code 4 is, that's not on my end," said King.

King says one reason he decided to run for sheriff is because he didn't like how the internal investigation focused on Ray was conducted.

The candidate was asked if he would make staff changes at the Sheriff's Department if he wins in November.

"I'd probably be jumping up in joy because I have an uphill battle. But if I win, I want to, people have asked me, do you have the quote unquote hit list, are people getting fired. No, right now I probably say I have more stress right now, with trying to keep people inside the office staying, because we've had two supervisors leave within the last week. Another resignation just came in, and I'm told there might be even more going," said King.