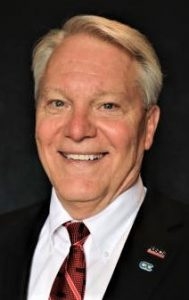 (Fargo, ND) -- The president of the State College of Science is retiring.

Effective December 17th. John Richman will step down from the post he has served since being named the ninth president of the school back in 2007.

“After 42 years in higher education, and 35 years of that spent at NDSCS, it feels like the right time to retire. I am very thankful to have spent the majority of my career at NDSCS and could not be prouder of the mission-focused institution it is today. It is the dedicated people and their commitment to our students which makes the College a special place, and I look forward to watching NDSCS thrive into the future,” said Richman.

Richman first came to NDSCS as a student in the early 1970s, then returned in 1986 as the Head Football Coach and through the years has been an instructor in the Health, Physical Education and Recreation Department, the Director of Athletics, and Vice President for Academic and Student Affairs. Richman served as interim President for one year and was appointed the ninth president by the State Board of Higher Education in February of 2007.

“Dr. Richman has served NDSCS in multiple roles for decades, and as President with unparalleled energy and dedication for close to 15 years," said North Dakota University System Chancellor Mark Hagerott. "We wish him and Marcia the very best as they embark on the next phase of life’s journey.”