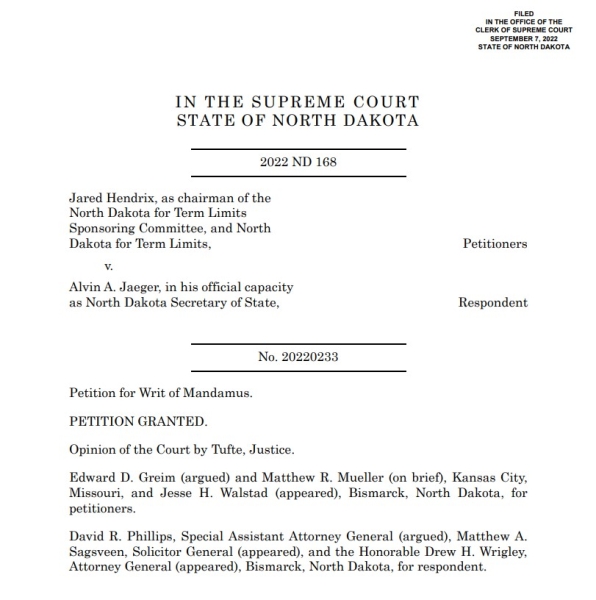 (Bismarck, ND) -- The North Dakota Supreme Court says term limits should be voted on for the November ballot.

The high-court ruling sided with supporters of the measure, saying Secretary of State Al Jager "misapplied the law" when it came to invalidating 29,000 of the 46,000 signed petitions turned in earlier this year. The ruling made by the court says of the 29,000 rejected, roughly 15,700 should have been accepted by Al Jager.

“We always knew that our committee had complied fully with state law and submitted more than enough signatures to the Secretary of State,” said Jared Hendrix, the North Dakota Term limits Chair. “The State Supreme Court agreed with us that the Secretary of State violated existing legal precedent in disqualifying the signatures, and is now requiring the proposal to be placed on the November ballot."

Court documents say the Secretary of State "invalidated every elector signature appearing on petitions gathered by circulators who's affidavits were notarized by Zeph Toe." Jager says several signatures were likely forged in the presence of Toe, with court documents saying "all affidavits (attached to 751 petitions that included 15,740 signatures) notarized by [Toe] were not counted."  The court says North Dakota law cannot apply the common law maxim 'false in one thing, false in all things' in this instance, saying only signatures with admitted or indicated fraud can be rejected.

You can read the North Dakota Supreme Court document by clicking here.