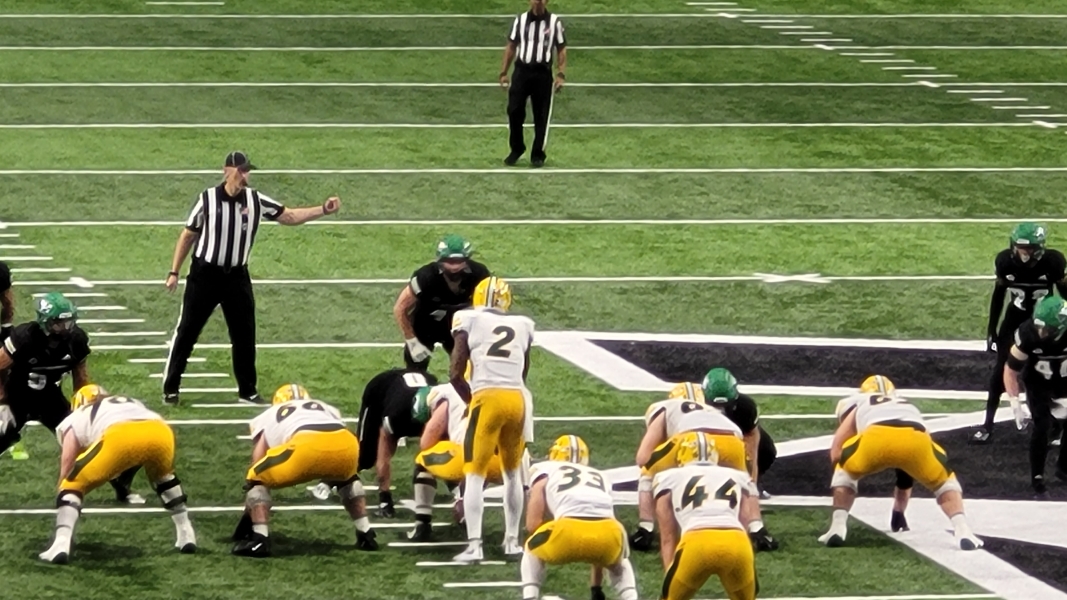 (Grand Forks, ND) — It was a game of special teams Saturday afternoon at the Alerus Center, as the UND Fighting Hawks and NDSU Bison combined for four field goals in a 16-10 Bison victory in Missouri Valley Football Conference action.

In front of a capacity crowd, the two teams took a majority of the first quarter to feel each other out, with both teams trading punts. UND looked in prime position early to potentially escape with a win, but fell short in the end.

“I was really proud of our guys today,” UND head coach Bubba Schweigert said after the game. “We knew it was going to be a physical game, and I think our guys really brought it today and played physical football, and we came up short.”

But it was Cade Peterson’s 42-yard punt with 9:02 to go that set up the eventual first score of the game. An initial rush by Bison quarterback Quincy Patterson, eating up 27 yards, set up a first down from the North Dakota 38-yard line. Nine plays later, after a Cam Miller completion to Noah Gindorff, Jake Reinholz got the Bison on the board with a 45-yard field goal.

UND took the lead on the next drive, an eight-play, 73-yard drive capped off by a Tommy Schuster 30-yard pass to Bo Belquist. Adam Stage’s extra point kick put the Fighting Hawks up 7-3 with 1:26 to go in the first quarter.

The special teams barrage continued early in the second quarter, as Reinholz put the Bison within one point after a 34-yard field goal, capping a drive that spanned only 32 yards on seven plays in just under three minutes.

NDSU took the lead, for good, with 4:34 left on another field goal. Reinholz nailed a field goal from 30 yards out, giving the Bison a 9-7 lead with under five minutes to go in the third quarter.

Field position then was the name of the game until NDSU’s final scoring drive began with 5:47 to go in the fourth quarter. Eight plays later, Patterson found the end zone from three yards out. The extra point was good, giving NDSU a 16-7 lead in the closing minutes of the contest.

But UND would not go away.

“We need to find a way to make some more plays,” Schweigert said. “I made a decision to put our team in a tough spot. I thought our defense responded well when I wanted to do that.”

What was an original return to the UND 28-yard line turns into a start on the UND 43-yard line after NDSU was assessed a 15-yard personal foul penalty. The drive came with just 1:07 left.

In just 51 seconds, UND was able to bring the ball to the NDSU 28-yard line, setting up a successful 46-yard field goal by Stage, bringing the Fighting Hawks within six.

An attempt at an on-side kick was unsuccessful, and the Bison took the victory formation final knee at the UND 42-yard line to end the contest.

UND edged the Bison in total offensive yards, 289-280, with the Fighting Hawks hurling the ball in the air for 176 yards, compared to NDSU’s 57.

NDSU will host Northern Iowa next Saturday at 1 p.m. at the FargoDome, while the Fighting Hawks will travel to Vermillion next Saturday for a 2 p.m. matchup against the Coyotes of USD.