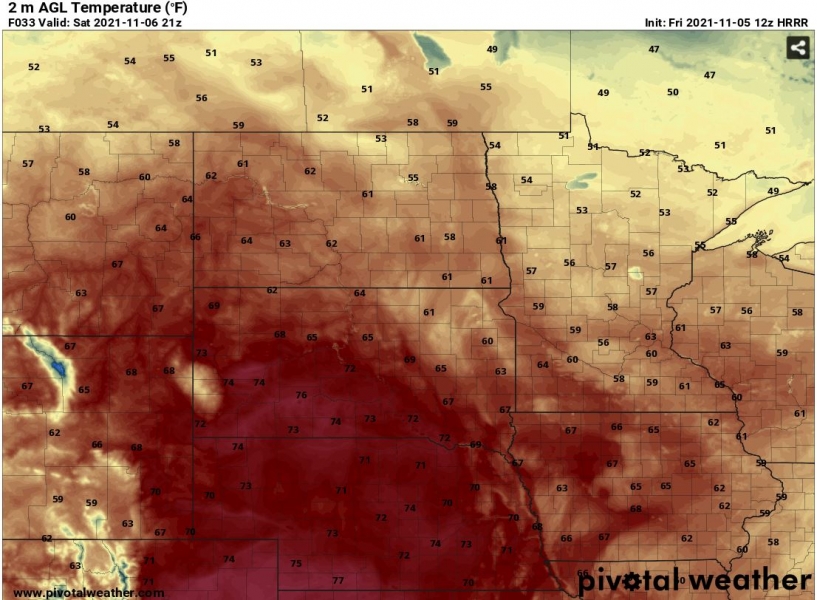 We are looking at a beautiful first weekend of November here in the Fargo metro and surrounding area for the deer opener! Temperatures in the mid 50's to low 60's stretch over today through Sunday.

Today will be a cloudy and breezy day, but temperatures will still climb into the mid 50's! With southernly winds between 10-25 mph. Tonight the clouds retreat, giving you a mostly sunny day for Saturday with highs near 60. Winds will be a bit lighter as well for Saturday between 5-15 mph. Clouds then increase for Sunday, giving us a combination of clouds and sun through the day with highs in the mid '50s with light SE winds between 5-15 mph again.

Things take a turn next week!

Looking at next week, I suspect a significant change is happening mid-week. Monday will be another nice day with partly cloudy skies, light winds, and temperatures near 50. On Tuesday, the clouds begin to roll back in advance of a large-scale system approaching off the Rockies. This system's exact path is still uncertain, but it looks to intensify over the great lakes area over Minnesota at the moment. This, of course, will change as newer computer models come in and as we get closer to the event. Which from this point looks to roll in Wednesday afternoon as rain. Then possible turn over to snow Wednesday night into Thursday.

With the potential for our first snow of the season, things look to turn windy mid-next week with that system and much cooler behind it. Highs look to be in the mid 30's to low 40's coming to the end of next week and 30's for the weekend.