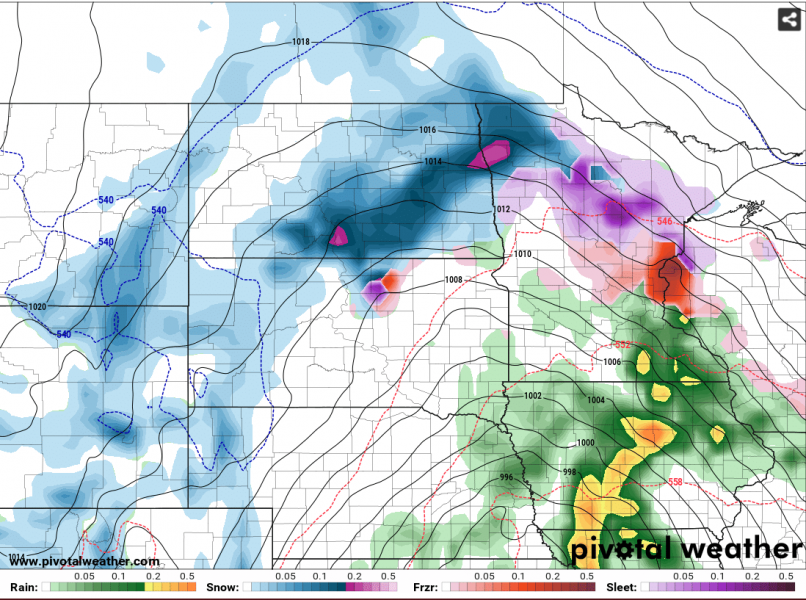 False spring has come and gone, leaving behind the cruel reminder that we are still in March. We got a few days where we were gifted with plenty of sunshine and temperatures reaching into the 50's! The snow melted off rather quickly, and thankfully the water content in the snow was considerably low. This was great for the flood outlook as river levels don't look that bad now. The Red River is now only expected to hit just shy of 28 feet within the moderate flood stage. These outlooks attached below may change as we head through the remainder of March into April with additional snow and rainstorms. However, runoff and melting will slow down, with temperatures returning below and near average for this weekend and next week. There is a wild card in the flood outlook, and I will touch on that in just a moment with signs of a typical spring snowstorm next week.

As mentioned above, the warmth is retreating and more average and below average temperatures are returning to the region. One more nice day is expected before things turn colder for the next 7-10 days. Temperatures for the coming week average between 40-45 degrees for highs and 22-26 degrees for lows. I am forecasting much of next week in the 30's with a couple of days in the low 40's, which will help with runoff into the rivers and allow water to flow downstream. Even with potentially measurable snow next week, temperatures would support slow melting.  You can always get the latest river levels on our website's Weather tab and for other rivers not linked you can visit here: https://water.weather.gov/ahps2/index.php?wfo=FGF

Today, Wednesday 3/23/2022 is just a chilly, windy day. Temperature are near average with highs in the mid to upper 30's, but it feels quite a bit cooler than 30's today! Wind will continue from the north between 15-30 mph and gusting higher at times close to 40 mph. The winds will lighten as we head through tonight, between 5-15 mph from the north with gradually decreasing clouds and temps down into the mid and upper 20's. This will set the stage for one more gorgeous day on Thursday. Mostly sunny to partly cloudy, light winds from the southeast, and warm with highs in the upper 40's and low 50's. Things will change Thursday evening and overnight however.

The wind will lighten up for the weekend, but it's still going to be breezy. North wind on Saturday between 10-25 mph, partly cloudy to partly sunny. East wind on Sunday between 10-20 mph, partly sunny. Both days, temperatures will be in the mid 30's. Slightly warmer on the following Monday, highs back in the lower 40's, but here is where the wild card I mentioned earlier comes into play. I expect another potent storm system to track into the region next week. Regarding the LRC, this storm is right on schedule, coming in about a day early. Signs are present that measurable snow is a possible outcome with rain and freezing rain. Likely to arrive Monday evening with scattered rain showers, turning over to a wintery mix and snow Monday night into Tuesday. I'm watching this system closely as it looks to possibly bring some impactful weather at the beginning of next week. There is a second system behind the first storm, which could turn into a couple day event with rain and snow. This is fairly typical for this time of the year, and we all know there's usually one big spring snowstorm. Is this that storm? Time will tell, and it's a possibility. Of course, it is too early to tell, and things will likely change. Like where does the rain-snow line set up? Where will the storm exactly track, and how fast will the storm move? These variables are still very uncertain. One of our models is hinting at a slower moving system and delivering some measurable snow whereas a couple of other models have this being more progressive and ejecting out of our area quickly leading to less snow accumulation. I believe this storm system will be more progressive but I will be watching it closely as it evolves through the weekend as it could still bring shovel-able snow.