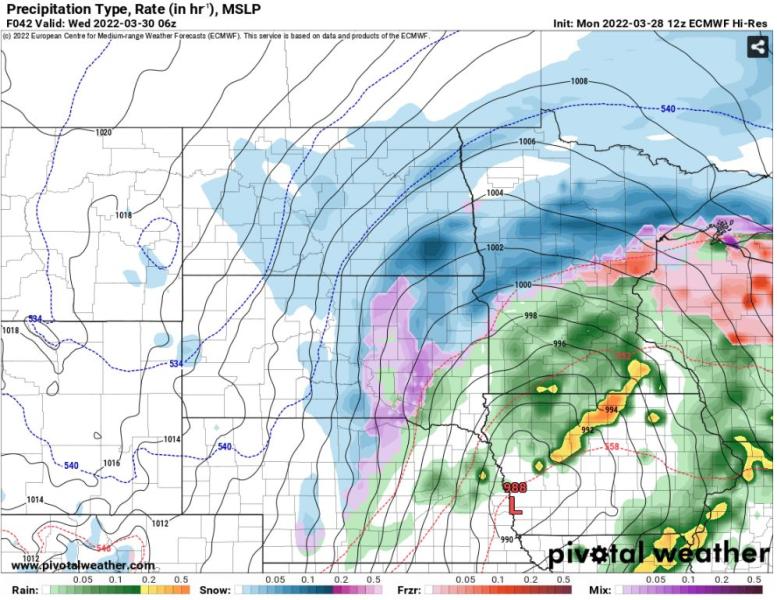 A while back ago, we touched on a potential storm system at the end of March, according to the LRC, to potentially bring impactful weather to the area. Now here we are, expecting another round of snow to round out March. Another strong low-pressure system is now forecasted to bring rain to the area later Tuesday afternoon and slowly turn over to a winter mix and the wet snow overnight into Wednesday morning. Along with it, strong winds are forecasted in front and behind the low likely creating patchy blowing snow and reduced visibility.

We are already getting in on some of the wind today, and the wind will be sticking around for the next couple of days. The wind will remain strong on Tuesday between 20-40 mph, with highs in the upper 30's to mid 40's. As the storm system inches closer to home, rain showers will take over the area by late afternoon to early evening. As this slowly turns over to wet snow Tuesday night, the winds will lighten up but return Wednesday morning from the northwest between 20-40 mph. Most of the snow looks to fall overnight into Wednesday morning, then taper off into the afternoon, but the wind will continue to be strong through Wednesday afternoon and likely kick up some patchy blowing snow. Most of the area will receive about 1-3" of snow to fall. I do suspect a potential band of 4-8" to set up in the southern valley into north-central Minnesota. Additionally, a secondary band of 2-5"+ may also form in northeastern North Dakota, just not as likely.

What should you expect?

Rain Tuesday evening will leave roads wet, which will freeze overnight. Rain will turn over to snow Tuesday night and continue into Wednesday morning before beginning to taper off Wednesday afternoon. Strong winds will pick up again from the northwest Wednesday morning between 20-40 mph creating patchy blowing snow and some reduction in visibility. Plan on slippery roads overnight Tuesday and Wednesday, with partially or mostly snow-covered roads, bridges will be icy, and reduced visibility at times from falling/blowing snow.