Nice Dry Week, More Rain This Weekend Into Next Week 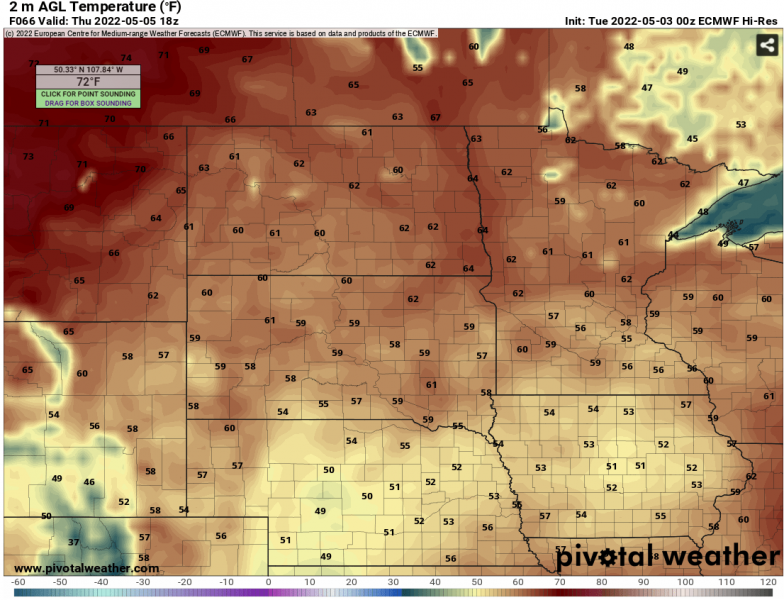 Finally, a week that feels more like spring! The sun is out, temperatures are warming up quickly, and the grass is greening up! So get outside and enjoy this week because next week looks mostly wet.

This week will hang onto light wind, and skies will bounce between partly cloudy and partly sunny/mostly cloudy. Clouds roll in overnight with lows dipping into the upper 30's. Wind remains light from the south tomorrow, Wednesday, with partly sunny skies and a slight chance for a couple of light sprinkles or rain showers south along the ND SD border with highs in the upper 50's. Temperatures finally bump above average for Thursday. Yes, I did indeed say above average but just slightly. Highs will peak in the lower and mid 60's Thursday with partly cloudy skies and light wind from the southeast between 5-10 mph. Clouds roll back in on Friday, will call it partly sunny, and the breeze will pick up just a bit between 5-15 mph from the SE.

The next chance for scattered showers will come later in the afternoon Saturday and overnight into Sunday. As a couple of systems mingle around our area, it will give us multiple days of rain chances into next week, possibly even the potential for a few thunderstorms come Tuesday and towards the end of next week.

Who would have guessed after last year, we would be complaining about all the excess rain we have had these past couple of weeks. April has gone down as the second wettest April on record. May looks like it as well, will be above average for rain. We will see a window after next week that should hopefully be long enough to where the farmers can get into their field and start the season off. I anticipate a couple of storm systems for the third week of May, but cooler air to our north may push those just a bit south, giving us more time to get the fields into shape and wet all our river levels to get back down.

Be looking for tomorrow's article as I break down the next three months... May, June, and July for potential storm systems in our area!