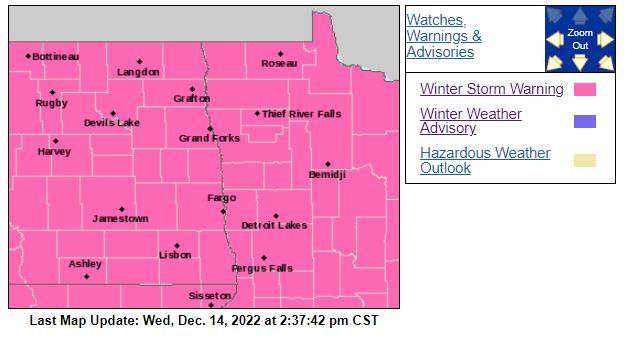 Today a few scattered snow showers and some pockets of a little drizzle and or freezing drizzle. Temperatures hold near 30 through tonight with some scattered snow showers building into Thursday early morning. For Thursday morning and into Thursday night wrap-around snow will expand over eastern ND and east of the river into Minnesota. Along with the snow which will be " lighter and fluffier" winds will be picking up from the north and then northwest between 15-30 mph and gusting up to 40 mph. This will likely produce areas of blowing and drifting snow where portions of our winter storm warning may be upgraded as blizzard to near-blizzard conditions are expected. Additionally, the winter storm warning may be extended into Friday afternoon or downgraded to an advisory for Friday as scattered snow showers will continue Friday and taper off through Friday night before teens and single-digit highs for the weekend, with lighter winds.

Through early Thursday morning into Friday night, an additional 4-8 inches of snow look likely with the potential for localized areas to see slightly more depending on the banding. Expected slick roads and reduced visibility from falling, drifting, and blowing snow Thursday and Friday.

Cold air sinks in next week with another potential clipper system around Wednesday then more arctic cold with highs below zero into Christmas.